Since the very first day when I found out that the actor Paul Walker has died, I asked many questions, decided to discuss this topic. After more than a month I’ve been documented on how he died, I came to the conclusion that nothing is accidental in this case.

Next, I’ll discuss the two theories ( two assumptions that deserve attention ) that I got after the informations discovered. Of course, all informations are related to the secret groups that lead the whole mankind from the shadows.

I think most people that are reading this article know that Paul Walker, after the earthquake that devastated Haiti on January 12, 2012, founded a company ( Reach Out WorldWide ) that provide immediate help for people around the world, in the case of natural disasters. If it turns out that this theory is true, we can say that the actor Paul Walker died because of the many charities that he accomplished before the accident in which he lost his life, and charity that he was going to make. The international press has written about a truth discovered by Paul Walker and his friend Roger Rodas in the Philippines disaster ( hurricane Typhon Hayan ).

In the moment of the impact, Paul Walker would’ve had upon him a record that proves all the above points that had to be given to a highly influential personality, his ally, but unfortunately, the actor plan and car was foiled ( Porsche Carrera GT ) was sabotaged. Otherwise there is no explanation demonstrating that a car made by Porsche, and especially the size of the Carrera GT supercar in case of the one owned by Roger Rodas garage, wasn’t the first time when it was out from the garage so the brakes brake.

It is quite clear that a traitor, led by those who revolve on fingers the lives of millions of people, sabotaged the car’s braking system, a possible accident being unavoidable.

A second theory, Paul Walker had connection with the Illuminati, and his death was just another sacrifice of that group that evil, that seem , slowly, trying to take over the entire planet Earth.

There are some indications that underlying this theory, first, the time the accident happened: 3:30 PM. If you remove the zero remains the number “33”, a number of important occult specifications, ie, the highest degree in Freemasonry is the 33rd degree.

Another clue is provided by the registration number of the car brand Porsche Carrera GT, look at the picture below: 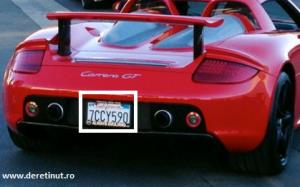 It is the number 7CCY590, for the record, I decided to translate this number with Gematria. Surprise, in Jewish Gematria, 7CCY590 represents the number 406, a number that, according to Jewish mysticism represents the archangel Metatron ( Metatron would be actually the prophet Enoch in the Bible that has been transformed into an angel, it is also called Naar, which means the Young ).

Related to this issue is very interesting and the message left by Paul’s good friend, namely Vin Diesel on Instagram account: ” Brother I will miss you very much. I am absolutely speechless. Heaven has gained a new angel. Rest in Peace. For many, this seems only some aberrations, but definitely something hides behind this tragedy.

” This Enoch, whose flesh was turned to flame, his veins to fire, his eyelashes to lightning, his eyes bright torches and whom God placed on a throne next to His throne of glory, after heavenly transformation was named Metatron. ”
Paul Walker burned alive, like the prophet Enoch, according to Hebrew mysticism, hence the doctrine of the Illuminati, it is a ritual of transformation in angel or archangel.

Death of actor draws a lot of questions, because it seems that everything was too fast covered, the truth is most likely masked by trivial accident in which the actor Paul Walker and pilot Roger Rodas were passing away in November 30, 2013.

If indeed it is a crime, and the actor had connections with evil Illuminati group, this tragedy was conceived without leaving room for interpretation, but even if I’m tracing my own, is very strange, in the press there is only information served by the police, nothing more. And that does not make me think about what I wrote above, this accident has not happened from a simple coincidence!