Generally accepted view on the evolution of our own species claim that Homo sapiens arosed in eastern Africa about 200,000 years ago, place where it remained until about 60,000 years, which is when our ancestors started in a race that would lead to the domination of the entire planet.

Such a view, however, is becoming increasingly challenged. Recent archaeological evidence indicates that Homo sapiens reached the Middle East since 125,000 years ago, what happened to these brave is still a mystery. No one can say with certainty whether they remained in Middle East, whether they migrated eastward or simply have disappeared in this attempt.

Last year, however, Christopher Bae, a paleoanthropologist at the University Manoa of Hawaii and Wei Wang from Guangxi Museum of China, along with their colleagues, have brought to light from the cave Luna in China more teeth which strikingly resembles those of our ancestors removed from the Homo sapiens species . Their age? Between 70,000 and 125,000 years.

” It’s not 100% certain that these teeth belong to the representatives of Homo sapiens,” says Erik Trinkaus, a paleoanthropologist at Washington University in St. Louis, USA. ” It’s an uncertain situation because we do not know too many aspects of dental evolution of the human species over the millennia.

What appears in the archaeological records as a feature of Homo sapiens might as well be an evolutionary aspect of other human species, some completely unknown ” adds the american specialist. 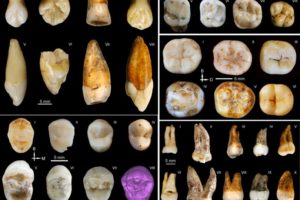 However, the teeth recently discovered in Luna cave are not the only evidence of the exodus of our species. In the Misliya cave in Israel, the paleoanthropologists identified a human mandible with old looking for at least 150,000 years.

Also in China, Zhiredong cave in Guizhou province , Erik Trinkaus revealed another jaw fragment and two molars. Old for at least 100,000 years, the bone fragments are suggesting , especially the chin shape, that the bones belong to a representative of Homo sapiens.

” There is strong evidence supporting the idea of anatomically modern human presence in Laos 50,000 to 60,000 years ago. And, yes, it becomes increasingly certain that our ancestors had reached at least in Southeast Asia at that time “, said Trinkaus.

It is an opinion supported also by the american paleoanthropologists John Hawks, a professor at the University of Madison-Wisconsin.

Recently, a genetic test conducted by researcher Katerina Harvati from Tubingen University in Germany showed that through the current genetic data, the exodus of our species is best explained by a model involving a first wave of migration that has started 130,000 years ago, those pioneers of our species reaching that time in southern and eastern Asia, possibly to Australia.

Subsequently, other and other migratory waves following this classical route.